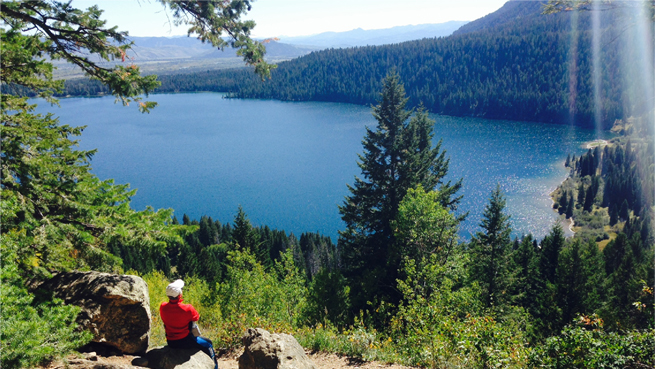 On a renewing trip to Yellowstone and The Grand Tetons, I had the chance to view my life through Nature's wide and humbling view. As Socrates's famous quote states, "the unexamined life is not worth living." Exchanging constant distractions for living, natural inspiration always leads me to introspection.

Like that honest self-reflection when you stare deeply into a quiet pond, I realized that, several times on my life's travels, I took the obvious, easy way out, and ended up paying a big price down the road. No doubt those pivotal points in my life would have led me down more prolific paths had I chosen that road less traveled.

These thoughts led me back to this poignant poem by Robert Frost in which he so eloquently states why it’s best to take the way that truly calls to you. Walk that journey with him a few times and see why you can make a huge difference in the quality of your whole life if you avoid the dead ends that look seductively like short cuts.

Why do so many people want to take the easy track? Because we’re brain-washed or, rather, programmed into thinking we can get rich instantly by being lazy—like some game show winner! Case in point: The big time RE gurus claim you can become wealthy by simply attending a 3-4 day boot camp, at the cost of $20-$50K per person. People want to believe it’s possible, and so they sacrifice whatever they can to go to these dog and pony shows, only to realize too late that it got them no closer to their goal (though it did make the Guru rich).

True learning requires being open, receptive, and observant first. Then you need to gain real knowledge gradually as needed, so you have time to really assimilate it. Once assimilated and instinctive, you own it, and can use it to manifest your dreams. This process is not easy, and it won't come at the end of a boot. So don't bleed out your money on these Extremely Expensive seminars. I’d rather see you get some basic knowledge at a little cost while walking—instead of sprinting past the details—and invest your money in actual deals that pay you back.

I’m really looking forward to seeing all of you become happy and successful, and boot your dreams out of the park.

Two roads diverged in a yellow wood,
And sorry I could not travel both
And be one traveler, long I stood
And looked down one as far as I could
To where it bent in the undergrowth;

Then took the other, as just as fair,
And having perhaps the better claim
Because it was grassy and wanted wear,
Though as for that the passing there
Had worn them really about the same,

And both that morning equally lay
In leaves no step had trodden black.
Oh, I kept the first for another day!
Yet knowing how way leads on to way
I doubted if I should ever come back.

I shall be telling this with a sigh
Somewhere ages and ages hence:
Two roads diverged in a wood, and I,
I took the one less traveled by,
And that has made all the difference.

©2020 Sam's Real Estate Club is a dba of LAREIC, LLC. All Rights Reserved.
Crafted by